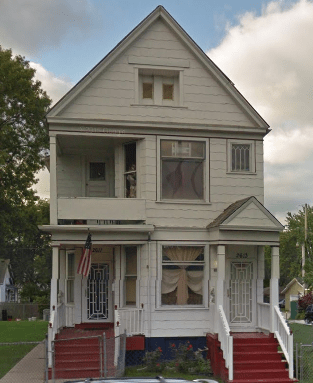 Once you meet Nellie Ferguson you won’t easily forget her or her family. Through the sounds of laughter when talking to her, comes the love she has for her late-husband Johnnie Ferguson Sr. and the pride she has in her eight children: James, Jessica, Mercedes, Jasmine, Phillip, Johnnell, Precious, and Johnnie Jr.

“We had four for him and four for me,” she said. “My kids include a lawyer, a banker, a cop, a dental hygienist, a phlebotomist, social worker, teacher and postal worker.”

She raised her children to be independent and homeownership was a part of that.

Nellie and her husband Johnnie Sr. bought their home through ACTS for $200 in 1997.

She fondly remembers working to rehab her home early-mornings before going to work and having her children help once they were out of school.

“We would get off of work, eat, and then go back to work,” she said. “John Worm [ACTS co-founder] came over one morning and the bathtub was outside.”

She loves her home and refers to it as “the white house” with full understanding that people will ask if she’s referencing The White House in D.C.

Nellie believes homes everywhere should be valued as much.

“What’s wrong with the inner city?” she asked. “You call it the ghetto, I call it five minutes away from downtown. I wasn’t going to take my children to live in Brown Deer and live outside of my means.”

She enjoys many of the gems that remain in central-city Milwaukee including a corned beef sandwich from Jake’s Deli.

She has passed this love of the central city down to her children. Most of whom are ACTS homeowners themselves.

Their decision to buy homes in the central city and fix them up may have come from Nellie and her husband’s decision to purchase theirs and seeing them do the rehab work when they were younger.

She makes it known she hates to see condemned, abandoned homes.

“Somebody has to fix it up,” she said.